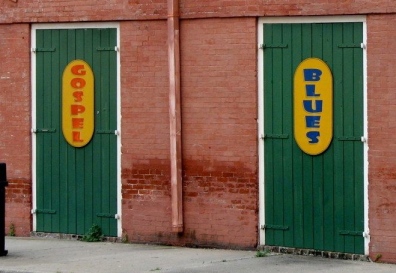 Though at first glance the title to this gospel blues song may sound a bit oppressive, ‘Down On Me’ is actually an uplifting song which is rich with a history that keeps moving it forward.  Gospel blues as a genre first gained prominence in the 1930’s, helped along greatly by the efforts of Thomas A. Dorsey.  As a composer, Dorsey gave voice to a music that for a number of cultural reasons was ready to be shared with a wider audience.  And though his music was not the only avenue for gospel blues to travel, he did work with some of the greats, such as Mahalia Jackson.  ‘Down On Me’ traces the same arc as that of gospel blues in general,  having its roots in the rural south and then migrating into more urban settings.  And like a lot of lyrics in traditional music, words are fairly permeable from one song to the next.  For instance, some versions of both ‘Down On Me’ and ‘Hand on the Plow’ have identical verses. 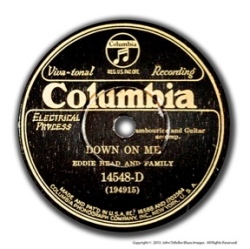 Though its authorship is lost in history, ‘Down On Me’ was first recorded by Eddie Head and his Family in 1930.  The sound is rural, with lead vocal by Eddie, backing vocals that are almost chanted, and guitar and washboard accompaniment.  It shows up on a couple of great compilations including ‘Goodbye, Babylon’ and ‘American Primitive, vol. 1’.  Another early version is John Lomax’s 1940 field recording of Dock Reed, a soulful a cappela piece that really captures the rich rural sound of the south.  It can be found in the Archive of Folk Culture at the Library of Congress.

In 1963 the song kept its rural, acoustic flavor but moved into the urban scene by way of the folk revival.  Eric Von Schmidt, a key player in the Cambridge folk scene and an early friend of Bob Dylan’s, included it on his 1963 album ‘Folk Blues.  His version is a stripped-down piece comprised of just voice and harmonica.

A  few years later the song lost its acoustic roots altogether in the version most of us recall.  Big Brother and the Holding Company, featuring Janis Joplin, covered the song on their 1967 debut self-titled album on Mainstream Records, prior to their signing with Columbia.  That version keeps the melody fairly intact but does change up the lyrics a bit.  Gone are the biblical references and what we get instead is “an old spiritual, revitalized and slightly bastardized” (this quote is from a letter Janis Joplin sent to her parents).  According to Big Brother guitarist Sam Andrew, the group liked to open with this song.

The B-Side Growlers version of ‘Down on Me’ (check out our video below) incorporates bits of all this history: a simple catchy acoustic guitar lick from Eddie Head, an ending nod to the blues-rock version from Big Brother & the Holding Company, and select inspirational lyrics from both Dock Reed and Janis, including:

“One of these mornings bright and fair,

Put on my wings and I’ll try the air…”

“Believe in your brother, have faith in man.

Help each other honey, if you can…”

We hope we have a chance to share ‘Down On Me’ with you sometime in person!  To see if the B-Side Growlers are playing nearby soon, check out our calendar or Facebook page.